A Coverage by TheEdge News 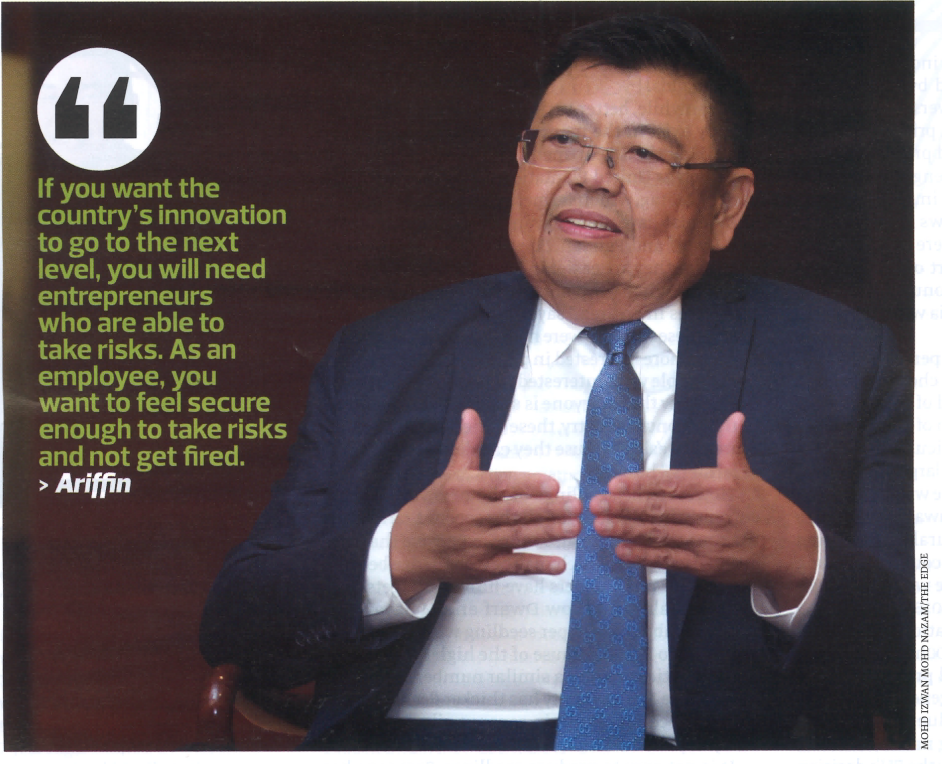 It is not always about acquiring the latest technology to get companies to succeed.Sometimes, it is the “human problems” — such as company culture — that require attending to and can transform their performance, says Dr Ariffin Yahaya, who was group architect
at US-based Yahoo! for nine years before returning to Malaysia.


It may come as a surprise to hear someone with a background in deep tech give this advice,but
he speaks from experience in both the sector and the business world. Ariffin launched several businesses even before he completed his undergraduate studies and started another right after he graduated.


But he also went through hard times The two most recent ﬁnancial crises badly affected his businesses and led him to apply for work at Yahoo!.


These experiences taught him many lessons, one of which was that companies that succeed are started by founders who are willing to take risks. For instance, when the founders of Google emerged, they rocked the boat by changing the way search engines worked.


“There was Alta Vista and other search engines back then, but they indexed things directly. Google did them indirectly,” says Ariﬂin.


Search engine indexing refers to the inclusion of a webpage to a search engine such as Google or Yahoo!. Google indexes by ranking the pages based on how many times the website has been Cited by other sites,whereas primitive web search indexes by the order the Webpages were found without ranking them.


“If you want the country’s innovation to go to the next level, you will need entrepreneurs who are
able to take risks.As an employee, you want to feel secure enough to take risks and not get ﬁred,” Arifﬁn tells Enterprise.


This requires a change in company culture so that it nurtures employees who are willing to innovate and grow. Companies can do this by offering rewards to outperformers.


“The one big diﬂerence I see between Malaysian and US companies is that I had workers in the US who were very proactive and motivated. [In some US companies,] if you do well in a project, there is a structure of instant bonuses. I could immediately approve an instant bonus of about US$500, for example. It is not much, but that can buy you a really good dinner,”


“Second, salaries in the US do not limit what you could make. By doing well, you could encourage the management to share the proﬁt with you.”


In his interview with Enterprise, he emphasises the importance of a company’s culture. Companies must hire people who are motivated and willing to learn, instead of hiring based on their educational pedigree.The companies that give employees the freedom to grow will attract the most talent.


“How do you make the relationships between people better so they want to work? Culture is important. I get a lot of things done that others cannot because it is all about relationships.
When I was a junior, I was nice to everyone and when I got to a certain level, everyone was nice to me. It is also about how to choose your words and understand someone’s concerns,” says Arifﬁn.


This leads to his other point: Sometimes, problems that surface in companies cannot be solved by software alone. Technology probably accounts for less than 10% of the equation when it comes to success. In addition, you need to treat people nicely and cultivate employees who can become talent magnets, he says.


“A state government official once come up to me and said he needed software to solve a particular problem. But the point is that it was not a problem that software could solve — 90% of it was actually a human problem. You then need to understand what the desired areas of improvement are. I have a feeling that those are the things that need to be handled before you
can talk about the advancement of a company,” says Arifﬁn.


Throughout his career, he has reviewed many startups in Malaysia, Indonesia and Vietnam.


He was one of the advisers of the Malaysian Global Innovation & Creativity Centre (MaGIC) when
it was launched. One thing that struck him was that many entrepreneurs only aimed to expand
within the country when in fact, they had the potential to do well on the global stage.


“I think people should aim for the stars.Have you seen the cartoon Pinky and the Brain? It is about two mice in a lab. Every day, Pinlty asks, ‘Gee, Brain, what are we going to do tonight?’ And Brain says, ‘Same thing we do every night, Pinky. Try to take over the world!’ I think that is what people should do if they want to go into business,” says Arifﬁn.


There are many funding opportunities in Malaysia for ambitious entrepreneurs, he adds.
“There are opportunities here that are not enjoyed anywhere else in the world. For example, there are at least three or four government agencies that will give you money if you have a great idea.This is unheard of in Silicon Valley, which is full of vultures, or people who will give you money but also take 90% of your company.”


A HISTORY OF HUSTLING


Ariffin,who is now focusing on his technology consulting ﬁrm Acquro Sdn Bhd and start—up Sari Data Sdn Bhd, has come a long way. In the 1995, he quit his undergraduate studies after the ﬁrst year to sell software products. Tempted by the income, he subsequently started several businesses in other ﬁelds.


“This was in the mid—1995 and the economy was booming. Everyone had money and it did not really matter what you did. As long as you did something, you made money. I was enjoying the uptick. Unfortunately, reality hit us when the 1997/98 Asian ﬁnancial crisis struck,” says Arifﬁn.


He had to sell his only asset a house in Ipoh. He then bought a smaller house for his mother and
used the rest of the money to continue his studies in the US. He only had enough funds for one semester and six months of living expenses. He had to work part—time as a dishwasher and a night watchman just to survive.


“I was determined to get a degree because I knew I was probably not going to be productive
doing anything else in Malaysia. Sometimes,when you are beyond a certain age in Malaysia, no school wants you. By then, I was already in my thirties. So,I thought the only way to get an education was to go to the US,” says Arifﬁn.


Despite the hardship, he started learning about technical networking and did research with a professor who had a project with Hitachi. The technology that they worked on ended up being used by the company to bid for China’s next—generation network and this turned his life around, says Arifﬁn. Hitachi continued to sponsor his doctoral studies for the next seven years.


“In the penultimate year of my PhD, I started a medical billing company with three other people.
In the Us ,the national health insurance Medicare pays you according to where you are as opposed to a standard rate.So,we compiled the information using big data ,which was very buggy at the time and not understood by many. We gave the doctors a programme where they could game the system. By using our system, they could probably get 5% to 10% more savings, which is
a lot to a doctor,” he says.


But the 2008 global ﬁnancial crisis affected the company badly. Ariﬂin had to get a job at Yahoo!, where he joined as senior software engineer and eventually rose through the ranks to become group architect. During his tenure there, Marissa Meyer came on board as CEO in a bid to revive the company. And he was tasked to ﬁnd out why the company was so slow in executing innovations.


Yahoo! was lagging behind its competitors because it was focusing on too many technologies at
the same time and each team was working in silos, Arifﬁn said during the MIDF talk.“Silos cause divergence. Our ﬁrst product was yahoo.com, then came messenger, mail, ﬁnance and sports. But the point is that they never talked to each other. So, we had many divisions with thousands of employees.”


Eventually,Yahoo! was acquired by Verizon in 2017 and he left the company. He decided to come back to Malaysia so he could be closer to his family and friends.


Now,Arifﬁn plans to impart his knowledge and experience through Acquro to local companies that want to digitalise. His expertise lies in massively scalable systems that incorporate big data and machine learning.


He also has experience working with architects, product managers and developers to understand
complex problems and come up with innovative technology solutions that are aligned with busi—
ness goals. “Before you can digitalise,you have to understand your business holistically and I think this is a difﬁcult thing. The main problem when you are not holistic is that when you ﬁx one box, it affects another box. You do not expect this and now, the whole picture has changed. You do not need to build everything at once, but you do need to understand everything,” he says.


Ariffin’s other company, Sari Data, deals in software innovation. One of his projects is to create a
solution for indoor locations. In Malaysia, some malls have already been mapped with indoor locations by here.con1. Now,he wants to utilise that information and create new solutions for users.


“We are trying to make software that can ﬁnd people in enclosed areas using your phone. Or, let’s say you go to Kuala Lumpur City Centre and want to find a store. Usually, you would look at
the directory. But now, you can have something like Waze for the mall,” says Ariffin.


“Another thing I am interested in is helping the government in areas such as tourism. It is all about data that is bigger than life.”